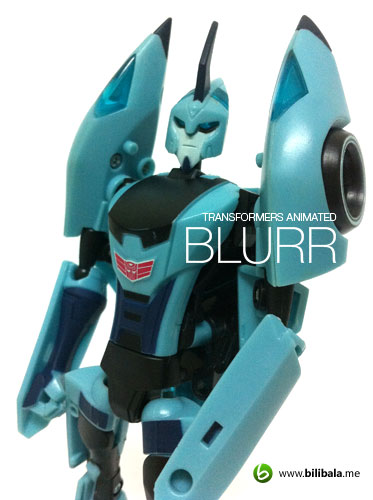 Well, sorry to backtrack a bit, this piece of toy has been in my vault for too long and all pictures have been taken previously. Just couldn’t find time to write this “outdated” piece of collection while myself being possessed by the enthusiasm of reviewing more of those latest Transformers toys. And of course, they still remain as my treasured collection and in time, i will try to chip in some of the “classic” transformers review such as this. ESPECIALLY with the Transformer Animated toyline which resembles my most favorite Transformer toy collection of all time. (A) Alternate Mode
The alternate mode of Blurr comes in a sleek blue Cybertronian race car mode. The color scheme and structure of it somehow gives a resemble of a Tron vehicle, especially with those sleek line decals on the top of the car.  Cartoon accurate? Oh yes. The alt mode comes with a generously huge Autobot insignia embed on the hood of the car. To be precise, it should be the Cybertron Elite Guard insignia. The material composition of the toy is nicely done with matte plastic finishing mixed with transparent blue plastics used over for the headlights and the front bumper section (which is also the energon saw). Overall color composition is of cyan blue, dark turquoise blue, black and red.

Another point to note here is, due to the matte plastic and lighter color being used, the figure itself is quite prone to yellow discoloration over time. Although it might not be as serious as compared to those white colored figure, but it does exhibit some part sof “discoloration” . The rear wheel does have a lot of resemblance for a Tron Light Cycle.  Though it might seem unlikely for the rear wheel to roll (without the middle axis in the wheel), it does perform otherwise. You can freely roll him up and down with all the wheels. Nice engineer and the determination to keep it cartoon accurate. Well done Hasbro! Hollow spaces shown from the rear of the vehicle. This is where Blurr actually hides his head here. The rear light are painted in red. Simple, streamlined curve makes this piece irresistible to be collected. (B) Robot Mode
First impression on the robot mode: tall and skinny. Yes, the figure actually stands about 16cm tall in height and he does pull off a lot of weight with skinny arms and leg. To top it all, he comes with 2 big and bulky shoulder pads which add up the upper body weight. It does look weird with the back kibble design but rest assure, that piece is removable and forms the the shield/weapon for Blurr. Removing it will make the robot mode much more prefect.

Though being tall and skinny, the body to weight ratio of the figure is neatly done, especially with the reinforcement of the body balance by having movable toes and flexible joints. Another point which i like about this figure is, it comes with 2 insignias instead of one. One is located at the car hood/shield and the other one located at the chest of Blurr. Seldom see Transformers toys having 2 sets of insignia in 1 figure.

I might call Blurr here being Mr. Pointy as he does exhibit quite a few point parts especially the upper body section. It isn’t hard to notice that the shoulder pads, the antenna like structure and the forehead of him are all pointing up. Anyhow, all pointy structures of him are actually made of bendy soft plastics. Sort of child-safety precaution.

The head sculpture is nicely done and it does come with a light piping feature which light up the iris of the robot. Articulation
Below is the rough articulation mapping for Blurr. Pretty much standard and definitely you can pose him with ease. (C) Transformation
Transformation is quite involving and there are some smaller parts you need to twist (e.g. the mid arm section). One part of it which I not much fancy is, before the transformation takes place, you need to manually remove the car hood. The car hood can later be plugged into the back of the robot mode. (E) Gallery of Goodies
Feel the coldness of this sleek race car and some eye candies to spice up! (F) Conclusion
I really like both alt mode and robot mode of him. Somehow it keeps on giving me resemblance of the bluish TRON figures. Anyhow, a great piece to have and definitely worth the penny for him.

My PCR for him: 8.5/10
What I like – Sleek 2-in-1 weapon; cool robot and alt mode; 2 generously huge and clear insignia in both modes; tall robot mode which stand prominently.

What I dislike? – Discoloration on the plastic. 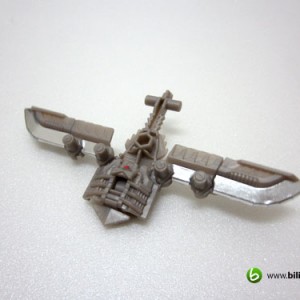 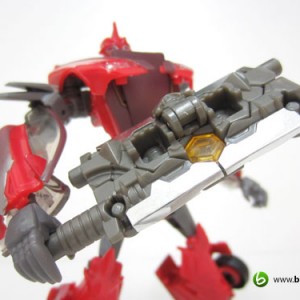